Skopje isn’t a city that attracts many tourists. Many Eastern European cities are busy with stag dos, couples on city breaks and backpackers, but Skopje seems to get overlooked. So, my friend Dave and I headed off in early Spring to find out more about the city.

By late March, the temperature starts to climb in Macedonia. We had chosen Skopje with a vague itinerary of visiting micro-breweries, drinking local craft beer in pavement cafés and sampling all sorts of stodgy local food. When we landed to see fields covered in snow, we realised this might alter our plans. Dave and I had booked an Airbnb from a chap called Filip, whose apartment was ideally located a short walk from most of central Skopje. It also happened to have a lamp which looked like a galaxy.

As part of our altered plans for staying out of the cold, we headed to the city museum to find out more about an earthquake that hit Skopje in 1963. Over 1,000 people were killed, 80% of the city was destroyed, and 200,000 were left homeless. The museum is housed in the former train station, fronted with a clock that stopped at 5.17pm, the moment the earthquake struck. The short exhibition documents the devastating effects of the quake, and the foreign aid offered in the aftermath. Countries all around the world donated money, building materials and volunteers to help Skopje recover. To this day, many streets around the city are named after countries who donated funds and materials to rebuild the city.

In 2010 the right-wing nationalist government decided to reinvigorate Skopje and give the small country something to be proud of. But rather than commissioning a modern architect, the then-ruling VMRO-DPMNE party turned to Ancient Greece for inspiration, drawing criticism for historicism; claiming the history and ancient culture of neighbouring countries for Macedonia.

Over the course of a few years, 20 towering marble buildings were commissioned, with a further 40 monuments and bridges planned. A 25-metre statue of a warrior, widely thought to be Alexander the Great, was added to the square, and hundreds of statues of notable Macedonian figures were crammed into every nook around the city. Two whopping great imitation galleons were added to the River Vardar and a replica Arc de Triomphe was built next to a car park.

Depending on your source, the Skopje 2014 programme cost between $400 million and $700 million US Dollars. This is in a country where the GDP per capita is just $5,200 US Dollars. The result feels like something between a film set and Disneyland. It’s kitsch, tacky, and completely ridiculous. We walked around the central Macedonia Square in awe of the sheer scale of these new buildings, in the knowledge that just a month before we arrived in Skopje, the new left-leaning government had proposed a programme of demolition to restore the city to its pre-2010 style. The whole thing seems to be a bizarre exercise in wasting money and time.

One of Skopje’s most famous citizens is Mother Theresa, so we felt that while we were in her hometown, we should find out more about her. We went to the small museum with replicas of her childhood home house in Skopje, and a few boards about her life. It did seem to mainly be a gallery of ‘famous people Mother Theresa had met’ but was interesting nonetheless. 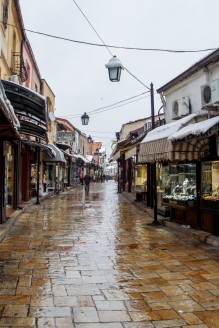 Skopje’s Old Bazaar sits on the hill leading up from the eastern bank of River Vardar. It dates from the 12th century, and is a tangled network of streets which all look charming, yet very similar. As we walked up the cobbles, the smell of wood smoke blended with the spice of slow-roasting kebab meat. The steady drip of melting snow plinked onto tin drainpipes and the call to prayer from one of many minarets echoed around the stone walls. Every other shop in the Old Bazaar is a barbers where old friends are catching up and no one is ever considering cutting hair. Displays of hammered gold and sparkling jewels caught the evening light in jewellery shop windows. As we reached the top of the hill and looked down across the terracotta roofs of the bazaar, a haze of smoke and mist shrouded the rest of the town and the reflection of the first streetlights reflect off the puddled cobbles. You sense it’s a place that hasn’t changed in hundreds of years.

We headed to the bar at the top of Hotel Arka in search of a panoramic view, and found a strange, deserted room with a bar on one side, and a swimming pool in the middle. Avoiding the signs advertising a Hepatitis Conference(!), we found an outside walkway around the top of the hotel which offered, as we’d hoped, a good view across the city.

The nearest mountain to Skopje is Mount Vodno, standing 1,066m above the city. One afternoon we drove to the foot of the mountain and took the cable car to the summit to see the Millennium Cross. The 66-m cross was controversially built in 2002, and now claims to be one of the largest crosses in the world. Considering it is so huge, and we were standing right underneath it, we couldn’t see a thing. The fog on Mount Vodno was so thick that we could barely see past the huge concrete plinth of the cross. After ten minutes of circling the cross while, bizarrely, Hard-Fi and Foo Fighters blasted out from nearby speakers, we returned to the cable car to head back down the mountain.

The following evening, we were exploring the Kale Fortress, near the Old Bazaar and realised we could see the Millennium Cross lit up on the mountain. And they’re right about the size – even from a few miles away it looked far too big.

There’s not a vast amount of guide book information or reviews that explore Skopje. But an article we had found in the in-flight magazine claimed that ‘Debaar Malo is Skopje’s answer to Soho’. We weren’t sure whether they were referring to the Soho in New York or London, or even whether ‘Soho’ were a question that required an answer from Skopje, but we headed towards Debaar Malo anyway in search of food and drink.

Debaar Malo tuned out to be lively with plenty of cosy little bars hidden on side streets. We had beer after local beer, cocktails and sampled the local rakija, a potent grappa-style aperitif which almost certainly did my liver no good. As we hopped from bar to bar, the snow fell heavily, and we quickly discovered that although it’s not the tastiest of drinks, rakija certainly keeps you toasty on a cold Balkan night.

On our final day in Skopje, Dave and I sat in a pavement cafe (surrounded by patio heaters, it was still perishing cold) and discussed what we thought of Skopje. The city is a strange blend of nationalism, patriotism, communism and fairground kitsch. In searching for its own identity, Skopje seems to have ended up as the most confused city I have ever been to. But it is a fascinating place, and certainly worth adding to the list of places to visit. Just perhaps not at the top.

We stayed at: FAV Apartments via Airbnb (airbnb.co.uk)
We ate excellent kebabs at: Teteks 2 (inyourpocket.com/skopje)
We admired the view from: Hotel Arka (hotelarka.mk)