Europe’s oldest inhabited city, Plovdiv has been ruled by many and invaded by many more. Revival Bulgarian houses sit alongside stark soviet concrete buildings. Modern roads follow the alleyways of an old Ottoman bazaar. Europe’s longest pedestrianised street is interrupted only by a cavernous Roman stadium. And it’s also a pretty affordable place to visit, so what better place to take Nicola for her birthday?

We had hired a car for the weekend, for the very reasonable fee of £6.97 per day. At least, I thought it was reasonable until I saw the car sitting outside the airport. It looked like a car drawn by someone who had never seen one, and didn’t seem to have any discernible marque or model assigned to it. We turned the key to start the tiny little lawnmower engine, and slowly crawled away from the airport towards Plovdiv, flimsy plastic dashboard rattling all the way.

The city of Plovdiv is divided into different quarters. We were staying at Hotel Hebros in the old town, an area full of Bulgarian Revival houses overhanging stone streets. Our lovely little hotel room was like something out of a history book, with creaking wooden floors, thick velvet curtains and a grand roll top bath in one corner, which Nicola promptly filled with luxurious bubbles and jumped in.

Kapana, or ‘the trap’, is a maze of artistic shops and independent restaurants, thanks to a subsided rent scheme by the City. Early one morning we walked into Kapana for a coffee to find the grilles and shutters of the shops were down, revealing a labyrinth of street art. Airbrushed frogs, odd looking chaps with large watermelon heads and the occasional scratchy scrawls of Cyrillic graffiti mean it’s a fascinating place to explore. As an added bonus, the coffee at Monkey House Café was among the best I’ve ever tasted. 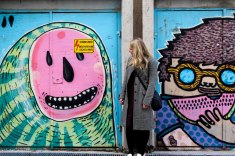 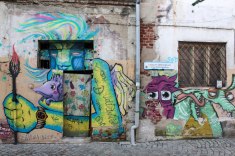 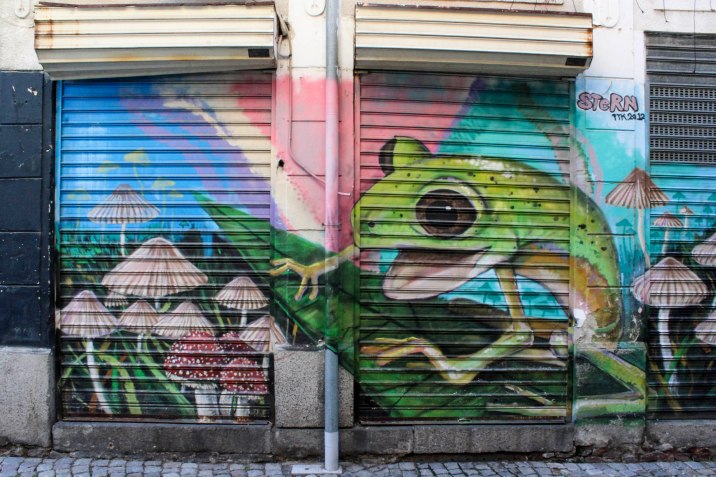 Bizarrely, Roman ruins are dotted fairly frequently throughout Plovdiv, and as a result are not treated with any real reverence or surprise. You often stumble across an ancient mosaic, some Doric columns propped against a wall; even the main shopping street is built over the remains of a Roman stadium. Some areas have been carefully excavated over the last few years; there can’t be many branches of H&M with Roman ruins on show in the basement. 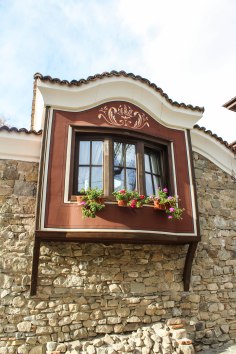 A window box in the Old Town, Plovdiv 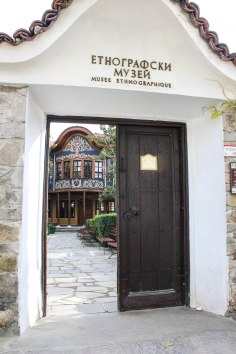 The winding streets of the Old Town, Plovdiv

One afternoon we booked ourselves onto a ‘free’ walking tour of the town. At the stroke of two o’clock, an enthusiastic chap resembling a goat turned up with a clipboard and a lanyard, the two internationally-recognised signs of authority. During the tour we explored the same streets, but now peppered with more information, anecdotes and spurious facts. I hadn’t thought I was particularly keen on organised tours, but all credit to the chap, as he made it interesting and entertaining.

The ‘free’ tour finished at the Roman Theatre, which, according to Tour Goat, miraculously appeared following a minor earthquake in the 1970s. It seems that for years the good folk of Plovdiv had been colluding to hide the ruins from the council, for fear of being inundated by exactly the sort of tour group I was now a part of. As the ‘free’ walking tour came to an end and an envelope was passed around for money, we headed back to the hotel.

The final day in Plovdiv was a chance to explore the Rhodope Mountains to the south of the city. After some interesting navigation around the Plovdiv one-way system, we found ourselves on the winding road to Asen’s Fortress. This fortified chapel sits at the top of a mountain about 20km from Plovdiv, and as it was the weekend locals were out in force hiking up the slopes to the Fortress. We crawled past them in the Daihatsu CrapWagon and eventually reached the summit.

After a climbing the remaining steps to the Fortress, we had the place to ourselves. With good reason, as it turned out there was not much to see in the fortress other than a few chairs and a window. But the view from the peak was spectacular: a small mountain river was bubbling away in the bottom of the valley, red and orange trees shrouded the steep rocky slopes, and the sun was beginning to burn through the morning mist. With the terracotta tiles of the Fortress catching the golden light, it was absolutely picturesque.

Our next stop was Bachovo Monastery, the second-largest in Bulgaria, and home to a number of beautiful frescoes as well as a golden room that looked like something out of Donald Trump’s interior design book. They were doing a bit of paving work in the central courtyard, so we faced the curious sight of monks with long beards and robes wandering among JCBs and tractors. After admiring the frescoes and renovation work, a goat who seemed to live with the monks started howling at us, so we decided it was time to return to the car park to see if anyone had stolen the Kia Shit. They hadn’t

On the way back into Plovdiv, we stopped at a little restaurant called ‘Ресторант Градина’ for lunch, partly as they seemed to offer sandwiches and snacks. We took a seat and were presented with a menu entirely in Cyrillic, by a waitress who didn’t speak a word of English. Not a problem, we thought, as we were armed with our trusty phrase book. But every suggestion from the phrase book: ‘cheese toastie?’, ‘sandwich?’, was met with a blank stare or a solemn ‘ne’ from the waitress.

With Nicola panicking that I was about to order us a mound of glistening kebab meat, we came to an mutual agreement with the waitress that we were going to eat ‘кашкавал пане’. As the two plates arrived, I tried to convince Nicola it was a delicious Bulgarian halloumi, but it was realistically two thick A5 slabs of battered, deep-fried local cheese. Not really what we’d intended to have for lunch.

As we returned to the airport and finally handed back our car, the chap from the hire company asked how it had been. Being British, and ever so polite, I nodded enthusiastically and said it had been great, thank you very much. He looked at me with a wry grin. We both knew this wasn’t the case.

One thought on “Plovdiv, Bulgaria”