Autumn is beginning to arrive in the UK by early September. Leaves turn orange, morning mist shrouds fields and the air turns cold. So it was with some anticipation that me and a group of old school friends headed towards the warmth of the south coast of Portugal.

Baluarte da Vila, Lagos, was home for the week, in a couple of apartments over the pool and looking towards the sea and the sweeping Meia Praia in the distance. The advantage of going just after the school holiday meant that there were no children yelling and splashing; the pool became a calm place to relax in the sun, drink and occasionally try to walk across the water on an inflatable pizza slice.

Lagos has a small old town with plenty of restaurants and gift shops, surrounded by a slightly less old town with shops people actually need. In the oldest areas near the sea, whitewashed walls and terracotta tiles create a maze of steep cobbled streets. Life is laid back in Lagos; bars open late and close even later, restaurants shut for most of the afternoon, and in the daytime the town sees just a few tourists padding around looking for postcards as locals relax and keep out of the sun. But once the sun has set, the bars open their doors, the seafood tanks light up at restaurant doors, surfers return from a day in the cold Atlantic waters, and Lagos comes to life.

Most nights we headed out into the old town for drinks and dinner, slipping and sliding down the steep polished cobbles of the old town like a touring production of Disney on Ice. Every so often on the way down to town, walking past a slightly ajar door, you catch a glimpse of a small bar, a few dusty bottles on a shelf and a wrinkly old man, his raisin eyes following your every slip as you pass. Welcoming as this was, after a quick group referendum we instead decided to opt for an evening in the more approachable bars in the centre of the old town.

One morning I rose at 6am and walked towards Praia dos Estudantes, on the south-eastern edge of the town. I arrived a few minutes before the sunrise and the sky was already lit up in a vivid fanfare of reds and oranges, wisps of clouds catching the light from just behind the horizon. As the sun rose, the shallow ridges in the sand cast long shadows, and the cliffs changed from a deep pink to a chalky white. With the sun rapidly heating the morning, I continued down into the centre of old Lagos, and wasn’t too surprised to see that most normal people were still in bed. There wasn’t even anywhere to get a coffee, so I walked back up the hill and climbed back into bed. The only hint that I had already out and about was a slightly smug sunrise photo on Instagram.

A few moments before the sun emerged 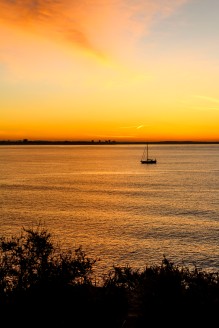 A fishing boat returning to port.

One lunchtime we ventured out of Lagos to a great little roadside restaurant which I feel deserves a mention here. Restaurante Casa Chico Zé is nothing special to look at, sandwiched awkwardly between a dual carriageway and a terracotta pot warehouse, but the place was fantastic. We were greeted by long tables and benches in an outside seating area almost entirely filled with locals. A fairly short menu of barbecued meats and fish created a smoky haze which wafted through the tables. Despite being a busy Saturday lunchtime, we found a space for seven at a table and tucked in. Between us we ate five chickens, two huge bowls of chips, a couple of salads, plenty of olives, bread and drinks, and it came to a total of just 58€ for the lot. If you’re in the area (or even if you’re not) it’s definitely worth stopping here for an excellent lunch.

Keen to see some sights of the Algarve other than beaches and bars, we planned a trip to Sagres, a small town at the western end of the coast. After bypassing most of the town itself, we arrived at the steep, forbidding walls of Sagres Fort. We dutifully paid €3 each and walked through the heavy wooden doors to find, well, absolutely nothing. There was no ‘other side’ to the fort, other than a scattering of modern buildings and a small chapel. Beyond the door was a huge, barren, blowy peninsula. Strong gusts of wind swept across the open land, messing hair, buffeting sea birds and sending the sparse plants bouncing into a frenzy. We ventured out to the edges of the steep cliffs, stopping occasionally to unearth a small flowering plant among a sea of dry seed pods. Atop the cliffs, a couple of brave anglers perched precariously on the granite, their thin fishing line arching out in the wind, empty buckets by their feet.

Before we ended up blown into the sea, we retreated from the fort and headed back to Lagos, where a nice warm Jacuzzi and a fridge full of Sagres beers awaited us. Culture, forts and history are nice and everything, but so is an ice-cold beer in a hot tub.

We stayed at: Vila da Baluarte Apartments (baluartedavila.com)
We ate at: Restaurante Casa Chico Zé (tripadvisor.co.uk)
We were almost blown into the sea at: Sagres Fort (lonelyplanet.com/portugal/sagres/)

One thought on “Lagos, Portugal”