In what seems to have become an annual August bank holiday event, Nicola and I packed the MG full of camping equipment and left London before dawn, headed for the fresh air and open roads of the countryside. This year, to Norfolk.

We were headed towards a charming little place called Hickling, where our friends Heidi-Lee and Chris had already set up camp the previous night. Not many campsites allow you to have a log fire, but we’d chosen Hickling as they promised a good stock of wood and firelighters, which would keep us warm and visible to each other for the cooler late August evenings. 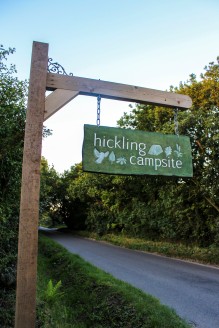 The campsite at Hickling

Heidi-Lee and Chris have a more practical car

The main draw of North Norfolk is the Broads, a network of 120 miles of navigable waterways and lakes. So one morning we hired a motor boat big enough for four, bought a few beers from a nearby pub to drink along the way and navigated out of the small harbour onto Hickling Broad in search of the plants and birds of the Broads. In hindsight, I think the chugging engine of our boat may have scared most of the wildlife away; a fairly pathetic little craft, it made quite a racket, despite the fact that it was limited to 5 mph and we were frequently passed by swans. But that’s what life on the Broads seems to be about – slow-paced, relaxed afternoons, drink-driving boats and occasionally getting overtaken by birds.

Aside from the waterways of the Broads, there are plenty of bays along the Norfolk coastline, from the beaches at Cromer and Hunstanton to the resident seals at Horsey Gap. Heidi-Lee had heard good things about Wells-Next-The-Sea, so we drove north for an hour, through tumbledown little Norfolk villages, towards the sea.

Wells-Next-The-Sea is either a small town or a large village. I’m never really sure of the difference. Either way, it’s certainly next-the-sea. Its main attraction is the ramshackle harbour front, a clumsy collection of small cottages, boatyards, restaurants and fish and chip shops. Every spot along the harbour wall was taken by children dangling bait in the water, buckets slowly filling with a motley selection of crabs. Across the road, the queue for French’s fish and chips was snaking steadily along the harbour, the smell of salt and vinegar wafting out with every newspaper package that emerged.

The beach at Wells-Next-The-Sea was already full when we arrived; nothing says British bank holiday like arriving at the coast and being faced with a sea of windbreaks, umbrellas and people attempting to light barbecues. We walked the length of the beach barefoot in the warm sand, passing the beach huts nestled at the top of the dunes, painted in pastel and backed by pine trees. Nicola and Heidi-Lee spend a considerable portion of the afternoon debating which beach hut they would opt for if suddenly confronted with this unlikely choice. I’d have been happy with any of them.

Dinner each night was cooked over the open fire, using a mix of charcoal and wood, and some good old-fashioned South African ingenuity on Heidi-Lee’s part. We had cheese burgers in brioche buns, barbecue-marinated ribs and sweet potatoes cooked among the coals, which we ate by the light of the flickering flames. As I said earlier, it really is worth finding a campsite that allows log fires.