The Algarve is an ideal place for some spring sunshine: its quick to get there, the weather is warm, the flights are good value and when you arrive in Portugal, Nicola’s mum has a mega pack of croissants ready for you to eat.

As with most trips involving Nicola’s family, there was a surprise element involved. It was Nicola’s Dad Clive’s birthday, and we were there to surprise Clive and potentially ruin his relaxing holiday. We arrived early outside the apartment and after ringing the bell, leapt out from behind the gate. Clive was surprised for a second, before getting worried that it was a long way for us all to come for a day, because there was certainly nowhere for us all to sleep.

The Vila Sol golf resort, home to Nicola’s parents’ apartment, is a cluster of crisp white apartments and villas, centred around a communal gardens and glistening swimming pools. Waking up every morning, pulling the curtains back and looking out across terracotta roofs nestled among sunlit trees is a life I could get used to.

The coast is a short drive or a long walk from Vila Sol, and we parked at Praia do Trafal and walked along the long sandy beach to Vila del Lobo. As with much of the Algarve, the main attraction at Vila del Lobo is a golf course, and it also happens to be where many footballers and millionaires live; we walked past Cristiano Ronaldo’s house and pretended that we wouldn’t want to live there anyway.

For Clive’s birthday dinner in the evening we went to Casa de Quinta, a great little restaurant on the outskirts of Almancil. Linda and Clive go there so much that they are on first-name terms with the entire staff. The rack of lamb was superb, as was the profiterole cake and decent helping of port that followed.

The next morning we left early for the small town of Loulé, a 15-minute drive from Vila Sol. Just inside the central covered market were a few shops that sell locally-made pottery, so we snapped up some crockery to take home and put at the back of the kitchen cupboard with the rest of the crockery. 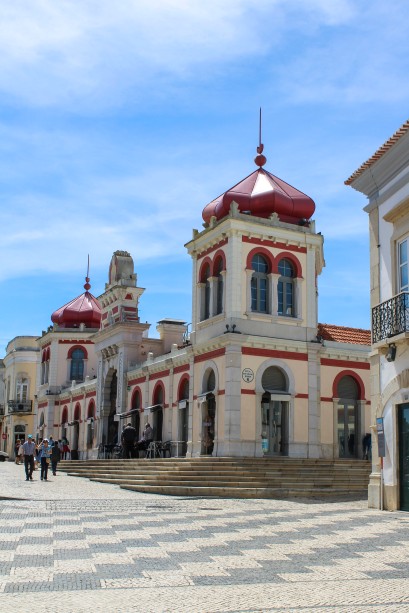 The covered market in Loulé.

That afternoon we headed towards the marina at Vilamoura to have a look at the hundreds of yachts which are all moored there. After being surprisingly picky about which yacht we would buy if the marina were a massive boat shop, we played a round of crazy golf. The crazy golf specifically gets a mention here because I came joint first; it turns out I’m more competitive than I thought.

On the final day in Portugal we headed to the small fishing town of Olhão and walked through the covered market alongside the sea, our feet splattering in the icy slush left by the morning’s fish haul. Too late I realised that the foam attached to the sole of my shoes was soaking up a lot of the slush like a sponge. As I came to terms with the fact that my shoes would smell rather strongly of fish for the rest of the day, we left the market and cut through a narrow cobbled alleyway, finding ourselves in the old town. 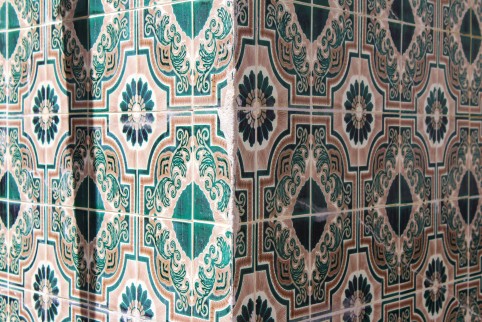 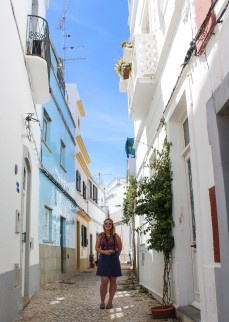 Nicola having a good look at the buildings in Olhao

The buildings of old town Olhão are all painted white, with terracotta roofs and ornate tiled walls gleaming in the sun. Nicola and I had recently decided to tile the bathroom with Portuguese tiles; I spent a decent amount of our time in Olhão hanging suspiciously around building sites in an attempt to find an entire wall of tiles sitting in a skip. No such luck.

On the way to the airport, we stopped in Faro itself to see some of the walled city and whitewashed buildings. We met Matt and Caroline at a pizza restaurant in the central square, and sat there in the sun among the orange trees, pretending the distant smell of fish was from the marina, and not our shoes.

We stayed at: Nicola’s parents apartment in Vila Sol (similar available at homeaway.co.uk)
We ate at: Casa de Quinta, Almancil (casadaquinta.net)
We wandered around: the old town of Olhão (olhaouncovered.com)