The last stop on our adventure around Costa Rica was Manuel Antonio, on the south west coast of the country.

We opted to stay at the beautiful ‘Hotel La Mariposa’, as it claimed to have the best view of the area, and also featured in a book of ‘1000 places to see before you die’. No harm in getting one place closer.

The view from the hotel was incredible. From the terrace you could see dense rainforest below, and hear the distant call of howler monkeys and screech of parrots. Sweeping white sandy beaches emerged from the edge of the jungle, and in every direction there was rich blue water, dotted with lush green islands.

Manuel Antonio National Park is the smallest of Costa Rica’s parks, and just what we needed after two weeks of trekking around the country. Within minutes of entering the park, we saw capuchin monkeys leaping around the trees, sloths snoozing in the canopy, and colourful exotic birds flashing past in the morning sun. There were bromeliads, ferns, palm trees and vines everywhere. It was like a ‘best of’. Now That’s What I Call Costa Rica 43. 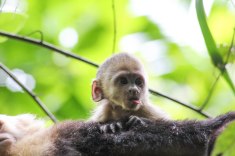 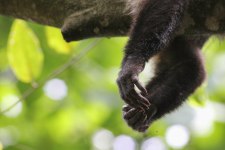 On the far side of the National Park there’s a small cove which looks exactly how you’d imagine a desert island to appear. Palm trees hang over the soft white sand, and crystal clear waters lap at the beach. After hanging our bags on a tree and asking a friendly sloth to keep an eye on them, we leaped and splashed our way into the ocean, making a right scene and waking up half the jungle. It was magnificent.

On the beach in Manuel Antonio

The beach at Manuel Antonio National Park.
We had read about a small bar that had opened in the fuselage of an abandoned 1950s plane, so obviously we headed in that direction to see what was going on. El Avion opened in 2000 after the owners bought the aircraft from some suspicious-sounding Nicaraguan arms dealers, and promptly turned it into a bar. They serve a reasonable (if expensive) selection of food and drink and had a good view over the bay, so we spent the evening there and watched the sun go down over the Pacific. I’m now keeping an eye on eBay for an old plane and a suitable  plot of land in London.

Our last day in Manuel Antonio was spent mainly eavesdropping. A couple staying at the hotel were getting married the next day, so we spent a glorious day lounging around the pool, listening to every word of their last-minute plans. The infinity pool nestled on the edge of the cliff, and vultures soared on the thermals above the rocky outcrop.

Nicola somehow managed to find the hashtag and photos of the preparations on Instagram, and we have followed the happy couple’s progress ever since. Congratulations to #mathiswedding2016, may you have a long and prosperous life together.

We were sad to hop on the coach taking us back to San José airport. Costa Rica is an incredible place, with wonderful friendly people and the best animals you’re ever likely to meet. Best of all, with increasing direct flights from Europe, it’s now closer than ever for millions of people. 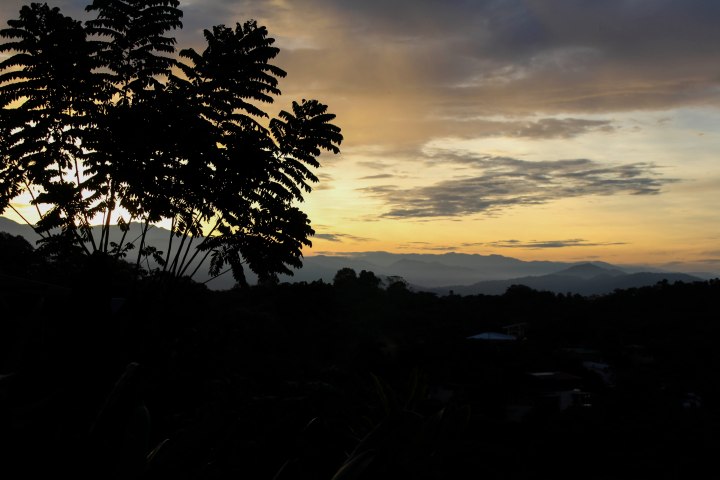 Forget that minibreak to Paris, and the relaxing week in the Canary Islands. Visit Costa Rica, land of sloths, monkeys, jungle and beaches. You won’t regret it.

A calming evening run in Bushy Park with my current wife.
A lovely evening at Union Chapel with @emily_eavis, @mscaitlinmoran & co., celebrating 50 years of Glastonbury
Nicola will almost certainly try to buy this lamp for the hallway.
Sunset after a day stomping around Istanbul with @nicolaransongreene #istanbul #massivemosque