La Fortuna translates as ‘The Lucky’, and is nestled under one of the most active volcanoes in the world, Volcan Arenal. The quiet town of El Burio decided to change its name following a huge eruption in 1968 which killed 72 people in a neighbouring town. The lava, rocks and ash avoided La Fortuna, and no lives were lost in the town. Lucky indeed.

We arrived at the beautiful Hotel Roca de Negra early in the afternoon; what a place to stay. Our little lodge had a terrace with a view of the huge volcano looming over the town. Around the terrace, banana, fig and mango trees grew in abundance, while chickens, geese and an occasional peacock strolled around the grounds. We sat on the terrace with a cool drink, looking up towards the rainforest growing on the steep slopes of the volcano.

That evening we went for drinks at the Lava Lounge, a very sensitively-themed volcano bar on the centre of town. The roof and walls are adorned with lava murals, they have a TV showing eruptions, and the drinks are suitable named (lava martini, on the rocks etc.). No one in the town seems to care that 72 of their neighbours were wiped out by the mountain which they worship; even the scrambled eggs and rice and beans we had for breakfast were sculpted into little volcanic mounds.

We decided to hire a car to drive to the volcano, arming ourselves with litres of water for what we knew would be a long day of hiking. On the way, we stopped at the Catarata de la Fortuna, a waterfall which plunges 70 metres over a cliff into the water below. After parking at the top of the hill, we walked down hundreds of steps hewn into the side of the rock, towards the plunge pool below. There, we stood for a bit watching the falling water before having a dip in the calmer waters beside the waterfall. After the hot climb down the steps, it was nice and refreshing. 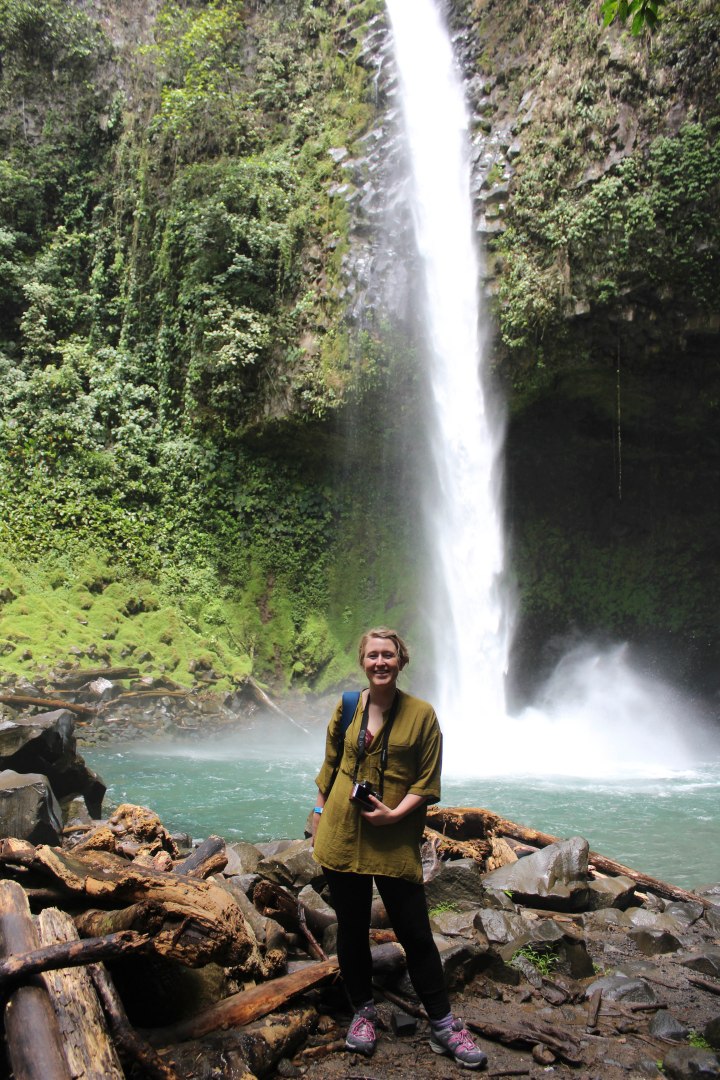 At the volcano we walked along narrow trails over the lava flows of 1968, keeping a keen eye out for snakes. When we crossed the point where the lava had stopped flowing, the forest changed completely. What had previously been dry, flimsy bamboo-like plants gave way to lofty trunks and lush green fern-ridden forests. Nicola is far braver than me; I had read that the highly-venomous the fer-de-lance pit viper was common in the area. Every root, vine and branch made me jump.

There have been minor eruptions every so often over the past few years (until the volcano had a break in 2010). We climbed up to the site of a 1992 eruption, where hot chunks of rock and lava had been flung over a kilometre from the volcano. We later saw a video of the same place during the eruption, with fiery rocks raining down on the exact spot we had stood. Safe to say we’re pleased we weren’t there in 1992.

All this magma and lava bubbling away under La Fortuna means lots of hot springs. After a tough day of hiking we retired to a spring which has channelled the warm water into a series of charming little pools and hot tubs. We had the place to ourselves, and made sure we tried every single pool – they all had varying temperatures, depending on how much you wanted to be cooked. I’m not sure of their claims of ‘cleansing the soul’, but after a busy day, it was perfect.

Given the quality of the roads (and the driving) in Costa Rica, we were very relieved to return the car, unscathed, to the dealership. That was, until the chap pointed out we needed to refuel. We hopped back in, and drove around the corner to the petrol station. I took a wrong turn, so turned around in the entrance to a tyre fitter. As I mounted the kerb, there was an almighty scraping noise, and the whole of the underside of the silver front bumper was scratched. Realising that there was a $1,000 excess, I gingerly drove it back to the depot, and parked the front of the car as close to the wall as I could without arousing suspicion. In classic La Fortuna style, we were lucky; we got away with it. Alamo of La Fortuna, if you’re reading this, I’m sorry. It’ll buff out.

We stayed at: Hotel Roca Negra del Arenal (hotelrocanegradelarenal.com)
We walked around: Volcan Arenal (youtube.com)
We splashed around at: Paradise Hot Springs (paradisehotspringscr.com)